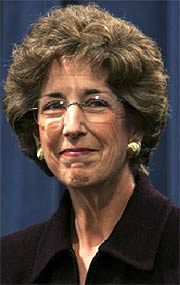 Carol A. Corrigan is an Associate Justice of the California Supreme Court. On December 9, 2005, Governor Arnold Schwarzenegger nominated her to the Supreme Court of California to replace Justice Janice Rogers Brown, who resigned to accept an appointment to the United States Court of Appeals for the District of Columbia Circuit. She was confirmed in this position January 4, 2006.