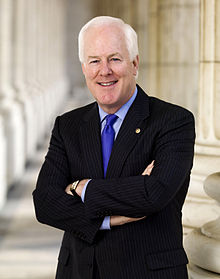 Senator Cornyn was first elected to the Senate in 2002 and previously served in Texas as a district judge, a member of the Texas Supreme Court, and as Texas Attorney General. In 2008, Texans overwhelmingly re-elected Senator John Cornyn to represent them for a second six-year term in the U.S. Senate. Sen. Cornyn currently sits on the Senate Finance, Judiciary and Budget Committees. He serves as the top Republican on the Judiciary Committee’s Immigration, Refugees and Border Security subcommittee.